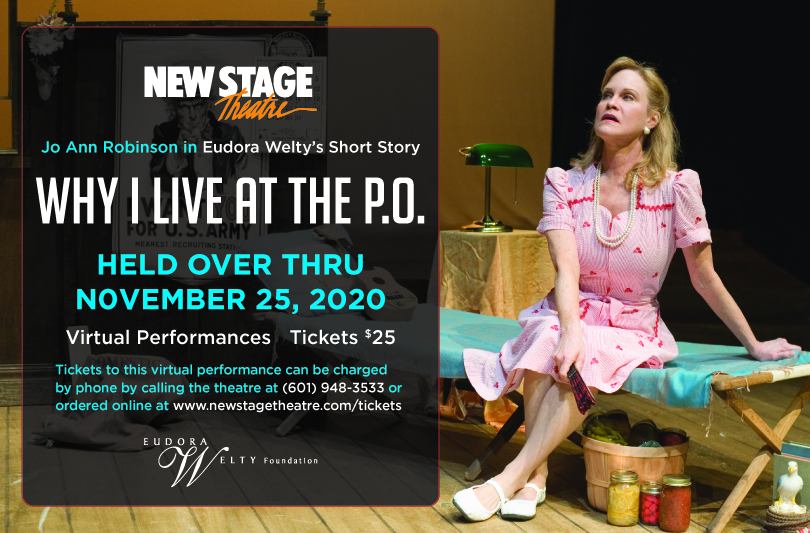 Jo Ann Robinson in Eudora Welty’s Short Story
Why I Live at the P.O.
Virtual Performances

New Stage Theatre will continue the 2020 Solo Show Series with a pre-recorded performance of Eudora Welty’s Why I Live at the P.O., filmed at the theatre in November 2020.  Featuring New Stage favorite Jo Ann Robinson, virtual performances will continue November 18-25 with access for 48-hours. Ticket prices are $25. Tickets to this virtual performance can be charged by phone by calling the theatre at (601) 948-3533 or ordered online at www.newstagetheatre.com/tickets. Tickets need to be purchased by 4:30 p.m. Monday-Saturday and by 12 p.m. on Sunday. Ticket buyers will receive a LINK to the virtual event on the day of the event two hours prior to start time and receive 48-hour access. Performed by special permission by the Eudora Welty Estate. Sponsored by the Eudora Welty Foundation.

The work of one of Mississippi’s greatest treasures, Ms. Eudora Welty, is brought to you through a performance of her hilarious short story Why I Live at the P.O. Miss Welty’s short story is brought to life in a one woman show starring actress Jo Ann Robinson. Robinson has been acting professionally for over 30 years in television, film and regional theatre. She has been a regular for more than twenty years at New Stage, as well as, a performer in regional theatres around the U.S.

Miss Welty’s work proves it…the literary classics can be a blast! This classic short story, set in 1941 during WW II, is told by ‘Sister’, a young woman who lives in rural Mississippi with her mother, grandfather, and uncle. “Sister’ is getting along fine with the rest of the family, until her younger sister suddenly returns to the homestead, with an unexpected ‘adopted child’ in tow. ‘Sister’ gradually becomes so fed up with her family, that she moves out of the family home and into the local post office, where she just happens to be postmistress. As the show opens ‘Sister’ is telling the story, to anyone who will listen, as to “Why I Live at the P.O.”

New Stage Artistic Director Francine Thomas Reynolds said, “It is a pleasure to continue the 2020 Solo Shows Series with Eudora Welty’s Why I Live at the P.O. starring Jo Ann Robinson. Jo Ann is a longtime favorite of New Stage audiences. I think Miss Welty, who was a great friend to New Stage Theatre, would approve! It is great to have a production back on our stage.”